The Anaheim Ducks have locked Ryan Getzlaf in for the long-term.

The team announced Friday afternoon that they have signed their captain to an eight-year contract extension with an annual average value of $8.25 million. The extension carries a total value of $66 million.

“This is a wonderful day for my family, as Anaheim has become our home,” said Getzlaf, a native of Saskatchewan. “The fans here have treated me very well, and I look forward to being part of a winning hockey team and contributing to the Orange County community for years to come.” 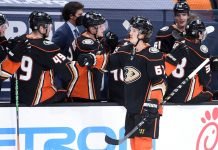