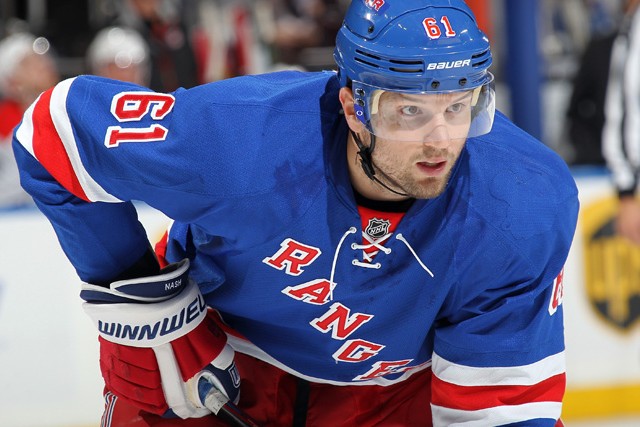 TSN.ca: Bob McKenzie believes the New York Rangers, who have mortgaged the future to contend for the next several seasons, will consider moving 42-goal scorer Rick Nash to combat salary cap restrictions beginning to weigh on the franchise.

“Mum is the word from the New York Rangers. They’re not talking about specifics, but I have to believe one thing that will at least be considered is the possibility of considering trading Rick Nash,” McKenzie said on TSN’s “Insider Trading.”

TSN.ca: Pierre LeBrun is reporting that the Edmonton Oilers are interested in acquiring a new goaltender. The Ottawa Senators‘ Robin Lehner, Anaheim Ducks’ John Gibson, and New York Rangers’ Cam Talbot are all of interest to the Oilers.

“It’s believed that the Edmonton Oilers … are among several teams that have expressed interest in Lehner,” said LeBrun. “Edmonton, by the way, has also called Anaheim on John Gibson and they have interest in Cam Talbot.”

Ottawa Sun: Ottawa Senators general manager Bryan Murray has fielded calls from the St. Louis Blues and San Jose Sharks about Craig Anderson, reports Bruce Garrioch. Nobody is sure what the Sharks or Blues are offering in return but both have contracts with veteran forwards they’d like to move if they’re going to take on Anderson’s $4.2 million cap hit.

The Blues did shop forward T.J. Oshie and $4.175 million cap hit through 2016-17 at the March trade deadline while you have to think Sharks’ GM Doug Wilson will attempt to peddle the contracts of veterans Joe Thornton and Patrick Marleau.