The Buffalo Sabres will be looking to trade most of their UFA’s by the 2021 NHL trade deadline. One name that keeps popping up is Eric Staal.

Pierre LeBrun was on TSN’s Insider Trading and stated that Staal would be open to a trade to a contender. He has a partial no-trade with 10 teams on it. But for the right team, he would certainly go.

LeBrun went on to say, Staal is living alone in Buffalo, his family is not with him, so what’s the difference [from] one hotel to another? He might as well go try and win somewhere else.

LeBrun is reporting that the Edmonton Oilers are interested in trading for a 3rd line center and have interest in Staal. A trade with the Oilers would have to be dollar-in dollar-out, as they’re right at the salary cap.

Other players the Sabres could move at the trade deadline is Sam Reinhart, Taylor Hall and Brandon Montour. 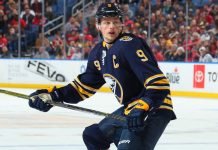 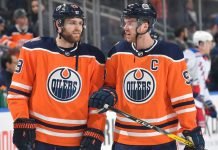 Will the Edmonton Oilers trade for Scott Laughton or Mike Hoffman?