After the Vegas Golden Knights failed to reach the Stanley Cup finals once again, GM Kelly McCrimmon will be looking to make some off-season changes and one priority will be to find an elite scorer.

Ed Graney of the Las Vegas Review-Journal reports the Golden Knights power play went 0-for-15 in the series and needs a massive overhaul, be it schematically or personnel. It’s also far-fetched to believe Vegas can — make that should — again carry a $12 million cap hit to keep both goalies in Marc-Andre Fleury and Robin Lehner.

The Golden Knights will likely trade Fleury this off-season to free up some much needed cap space to target an elite forward. The Pittsburgh Penguins had interest in bringing back Fleury last season but they could not make his salary fit. They might try again this off-season.

Graney went on to say Vegas should devise a trade package for Jack Eichel and give Buffalo a call? Why not see what Columbus would want for Patrik Laine, one of five players in NHL history who had 50-plus power-play goals through his first four seasons?

The Golden Knights are exempt from the Seattle Kraken expansion draft, so they will need to shed some salary as they will not lose a player in the draft. GM McCrimmon will have to trade Fleury along with another big salary if he wants to bring in an elite scorer like Eichel or Laine. 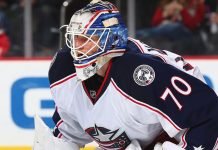 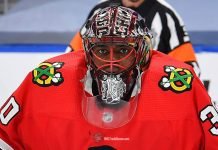