The Edmonton Oilers have a few holes to fill — They need a left-winger, second pairing left defenseman with experience with Oscar Klefbom out and a third-line centre with some offence — to fill right now.

The big question is, will GM Ken Holland trade away the draft picks? The answer is no. Holland stated, “Would I trade a first-round pick for a rental? No. For a player with term? Yes, I would consider it,” said Holland, who, might be able to get St. Louis winger Mike Hoffman for a prospect and a lesser draft pick, and the Oilers need considerably more than a left-winger to play with Draisaitl or Ryan Nugent-Hopkins, to go far in the playoffs.

Jim Matheson of the Edmonton Journal reports, Holland needs a third-line centre with some offensive instincts, also a 50 per-cent guy on face-offs, such as Philadelphia’s Scott Laughton, who has lots of grit and can drive a line offensively.

Matheson went on to say, Holland rarely gets shut out at the NHL trade deadline, and he will try to wait out teams for other pieces, such as Hoffman, maybe, or Laughton, hoping the cost drops.

But is Hoffman the left-wing answer on a second-line if Draisaitl plays with McDavid instead, with Kailer Yamamoto on the right? If the St. Louis Blues pay half his $4 million cap hit, maybe. He is fast and he can shoot, a streak scorer, but he does not have a history for playing in tough areas. 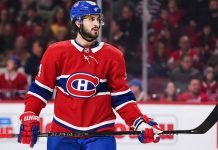 Phillip Danault will not be back with the Canadiens 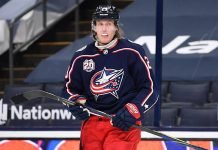