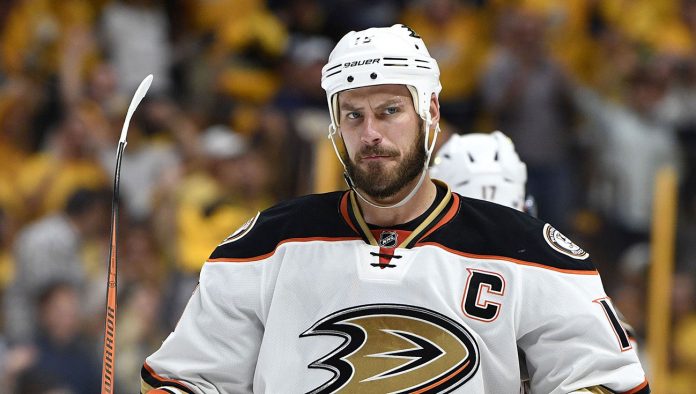 Penguins, Flyers, Bruins could have interest in Ryan Getzlaf

According to James O’Brien of NBC, Ryan Getzlaf could potentially be dealt later on this NHL season. Three teams have shown interest in Getzlaf, which would surely pick up should the Anaheim Ducks make it known to the league he’s available.

There has been no indication from the player or from the team that Getzlaf wants out for any reason and appears content riding out his career in the sunshine of California. Considering he’s already won a Cup, it certainly feels like he’s not going to demand to be moved.

While Getzlaf’s value isn’t peaking, he’s also entering low-risk territory. Theoretically, the Ducks could retain some of his salary in a trade. Also, while Getzlaf’s cap hit is $8.25M, his base salary is just $3M.

Expect to hear the likes of the Boston Bruins, Pittsburgh Penguins and Philadelphia Flyers get involved, if Getzlaf hits the trade market in a few months.

James O’Brien is also reporting that if things go south, could the Buffalo Sabres finally trade Rasmus Ristolainen? New GM Kevyn Adams might not feel quite as chained to the oft-criticized defenseman as previous Sabres executives seemed to be. With two years left at a $5.4M AAV, an opposing GM might be more comfortable gambling on the big blueliner, too.

Actually, no Sabres defenseman is under contract long-term. Ristolainen and Colin Miller are the only defensemen who aren’t in contract years, as they’re both signed through 2021-22.

If the Sabres do not live up to expectations this year, expect Ristolainen to be traded at the 2021 NHL trade deadline.