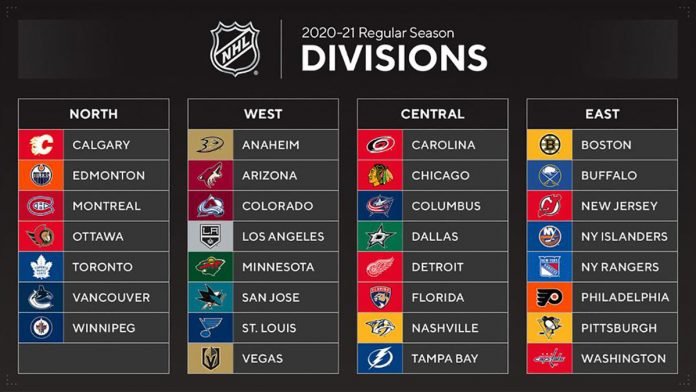 What will 2021 NHL Divisions look like for the upcoming NHL season?

With Canada not allowing cross border travel, the NHL will have to re-align the divisions for the 2021 NHL season. There will be a Canada only division. As for the other NHL divisions, it is looking like there will be three.

Regardless of how the league re-aligns its divisions, it will require a lot of travel for the Canadian teams, as well as more travel than normal for any American teams west of St. Louis. Travel is costly for teams – particularly when most aren’t going to be able to sell tickets. One way the NHL can help limit travel is by adopting a series-based schedule similar to Major League Baseball.

There has been no word on how many teams would make the playoffs? My guess would be the top 4 teams from each division will make the playoffs then possibly doing two separate bubble playoff formats like last year with 8 teams in each bubble.

Will the teams be re-seated or have the Canadian division vs the Metropolitan division and Pacific/Central vs Atlantic Central. Once the NHL and NHLPA come to an agreement we will find out exactly how the NHL season will take place.