Now that the NHL expansion draft is over, free agents have been signed, the one piece the Seattle Kraken are missing is a top-line center. Jack Eichel would be perfect, the Kraken have the salary cap space but lack the assets to make a trade.

Nicholas J. Cotsonika of NHL.com reports the Kraken do need more firepower up front, particularly at center. The Kraken look like they’ll be able to keep the puck out of the net with solid defense and goaltending, particularly with a difference-maker like Grubauer.

Cotsonika went on to say, will Seattle be able to score enough to compete for a playoff spot in their inaugural season? Do they have enough at center, especially with Yanni Gourde being out?

If the Kraken do want to contend for a playoff spot, they will likely have to trade for a top-line center if one becomes available as the season goes on. 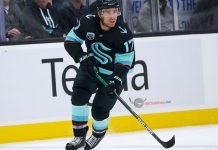 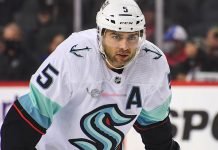 The Calgary Flames will trade for a top defenceman 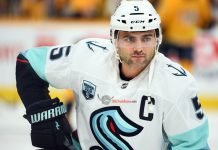 Will Mark Giordano be traded at the NHL Trade Deadline?