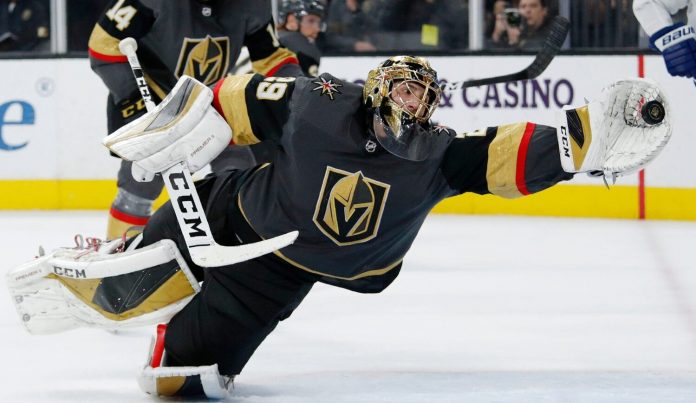 What will the Vegas Golden Knights do with Marc-Andre Fleury?

What will the Vegas Golden Knights do with Marc-Andre Fleury? It’s abundantly clear that the Golden Knights, whose signing of Robin Lehner actually put them over the salary cap, cannot devote $12 million to two guys who see themselves as No. 1 goalies.

Fleury has a limited no-trade clause, but he’s good as gone. That will leave the Golden Knights looking for a backup. How about Henrik Lundqvist moving from the bright lights of Broadway to the neon lights of The Strip on a short-term deal to back Lehner up? Sounds like a plan, doesn’t it?

With respect to Fleury, the Golden Knights could try to find a trade partner where they would undoubtedly have to take on some of his salary, or they could buy Fleury out. That would leave them with cap hits of $2.6 million, $3.1 million, $2.1 million and $2.1 million in the next four seasons. That would save them roughly $4.4 million in cap space in 2020-21 and $3.9 million in ’21-22.

Tyson Barrie was coming off a career season, finishing with 14 goals and 59 points in 78 games. But his struggles in Toronto were well-documented, as Barrie finished with only five goals and 39 points — his lowest totals in three years.

Barrie, 29, has recorded double-digit goals five times, and he has a trio of 50-point seasons — and a 49-point campaign — on his resume.  If Barrie entered free agency last year, he would have surely landed a lucrative deal close to $6 million a season.

McIntyre notes that Barrie only makes sense for the Canucks if Chris Tanev (a pending UFA) departs and if Barrie “is willing to take a shorter-term deal for something close to the $4.45-million Tanev was getting.”