With the Tampa Bay Lightning already missing Nikita Kucherov to a long-term injury, the Bolts appear to have Brayden Point out on a long-term shoulder injury after crashing into the boards.

The Lightning are calling it an upper-body injury but if you look at the video below, he definitely injured his shoulder.

According to TSN, Point appeared to favor his left shoulder-arm after crashing hard into to the end boards after being tripped in the third period in a 5-3 loss to New Jersey.

Point had an NHL-best 14 goals in last season’s playoffs. It was the second consecutive season that he topped the NHL in postseason goals.

Video of the Brayden Point Injury

NHL Injury: Darnell Nurse out with a broken finger 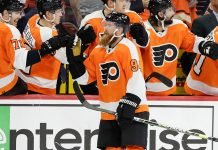