1972: Team Canada announces the 35 players who will be invited to camp to form the roster for the upcoming Summit Series, the first time NHL players will face the Soviet Union.

The list includes three goaltenders (Ken Dryden, Gerry Cheevers and Tony Esposito), 12 defensemen (including Bobby Orr, who ends up unable to play due to knee surgery) and 20 forwards. Cheevers, defenseman J.C. Tremblay, and forwards Bobby Hull and Derek Sanderson are on the list, but each has signed (or will sign) with the new World Hockey Association.

Because League President Clarence Campbell mandates that only players with valid NHL contracts can take part in the tournament, all four are replaced. Canada goes 1-3-1 in the first five games of the series but wins the last three, capped by Paul Henderson’s famous goal in the final minute of Game 8 in Moscow.

1982: Jim Devellano is introduced as the new general manager of the Detroit Red Wings, replacing Jimmy Skinner. Devellano, GM Bill Torrey’s right-hand man in the construction of the New York Islanders’ dynasty, takes over one month after Mike Ilitch buys the Red Wings and starts working to reverse the fortunes of a team that hasn’t won the Stanley Cup since 1955 and has qualified for the playoffs once in the previous 11 seasons. Devellano serves as GM until 1990, when he’s appointed senior vice president. After his arrival in Detroit, the Red Wings win the Stanley Cup four times, the Presidents’ Trophy six times and finish first in their division 15 times. He’s inducted into the Hockey Hall of Fame in 2010.

2000: Ron Low is hired as coach of the New York Rangers. He takes over a team that has missed the Stanley Cup Playoffs for three consecutive seasons and goes 69-81-9-5 in two non-playoff seasons before being let go. 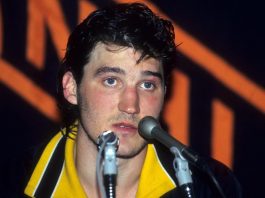 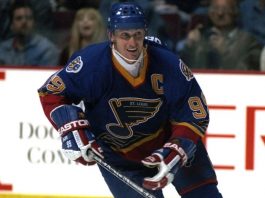 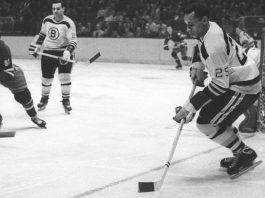 January 18: This Day in NHL History