1948: Montreal Canadiens forward Toe Blake fractures his ankle when he crashes into the boards during a 3-1 loss to the Rangers at Madison Square Garden. The injury ends the playing career of Blake, the left wing on Montreal’s famous “Punch Line.” Blake returns to the Canadiens as coach in 1955 and steers Montreal to five consecutive Stanley Cup championships.

1976: The two-time defending Stanley Cup-champion Philadelphia Flyers become the first NHL team to defeat the Soviet Union’s Central Red Army team when they win 4-1 in front of 17,007 fans at the Spectrum.

The Flyers defense limits the Red Army to 13 shots against Wayne Stephenson, playing coach Fred Shero’s system to near-perfection by bottling up the neutral zone, controlling the puck in the offensive zone for much of the game, and playing with a degree of physicality the Soviets aren’t accustomed to.

1983: Pat Hughes of the Edmonton Oilers becomes the first player to break an NHL record set by Wayne Gretzky. Hughes scores two shorthanded goals in a span of 25 seconds during the second period of a 7-5 victory at the St. Louis Blues. With teammate Don Jackson in the box for roughing, Hughes picks up a loose puck and beats goaltender Mike Liut at 15:18. The Blues pull Liut in favor of Rick Heinz, but Hughes scores again at 15:43. Hughes gets his two shorthanded goals two seconds faster than the record set by Gretzky during the 1981-82 season. Oilers forward Esa Tikkanen sets the current record of 12 seconds on Nov. 12, 1988.

1986: Marcel Dionne of the Los Angeles Kings becomes the first player in NHL history to score 20 goals in each of his first 15 seasons. Dionne scores twice and has an assist in a 4-4 tie at the Blues.

1990: Pat LaFontaine extends his goal-scoring streak to 11 games and has five assists for the New York Islanders in an 8-4 win against the Minnesota North Stars at Met Center. LaFontaine surpasses the previous Islanders record of 10 games, set by Mike Bossy, and scores 18 goals during his streak.

2000: Gary Roberts becomes the sixth player in NHL history to score 300 goals and have 2,000 penalty minutes when he scores for the Carolina Hurricanes in a 4-3 loss to the visiting Philadelphia Flyers.

2015: The Anaheim Ducks honor Teemu Selanne by raising his No. 8 to the rafters of Honda Center. Selanne becomes the first player to have his number retired by the Ducks. Of his 684 NHL goals, 457 are scored with Anaheim. Selanne is inducted into the Hockey Hall of Fame in 2017.

2017: Alex Ovechkin of the Washington Capitals becomes the 84th player in NHL history with 1,000 points. Point No. 1,000 comes when he scores a goal 35 seconds into the Capitals’ 5-2 win against the Pittsburgh Penguins at Verizon Center. He gets his 1,001st point with a power-play goal 8:06 into the second period. 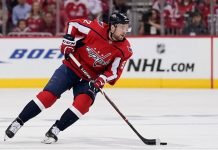 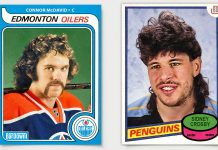