Trade rumors are going around that Toronto Maple Leafs GM Dave Nonis is quietly putting Dion Phaneuf on the trade market and he would like to have a trade completed no later than the NHL draft at the end of June.

Nonis will not hit a home run with a trade, nor should he expect to thanks to Phaneuf’s erratic play. Phaneuf has a year left with a $6.5 salary cap hit and may not take a pay cut from the Leafs.

There will be many teams interested in Phaneuf as he is great for the Powerplay, gives you a physical presence on the blueline, and if a team can accept his errors he will be traded.

The Tampa Bay Lightning, Detroit Red Wings and Columbus Blue Jackets all have interest in Phaneuf. 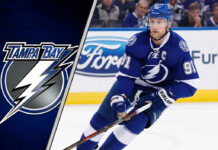