1933: Howie Morenz of the Montreal Canadiens scores his 249th NHL goal in a 3-0 win against the Detroit Red Wings at the Forum to become the League’s all-time leader. Morenz surpasses Cy Denneny, the previous record holder with 248. Morenz finishes his NHL career with 271.

1967: Rookie Wayne Rutledge makes 21 saves for his first NHL shutout and the first for the Los Angeles Kings, who defeat the St. Louis Blues 4-0. Brian Campbell scores twice for the Kings, who play their final game at the Los Angeles Sports Arena. After a two-game trip, they return for the opening of the Forum in Inglewood, California.

1978: Bryan Trottier sets an NHL record with six points in the second period and finishes the game with five goals and three assists in the New York Islanders’ 9-4 victory against the New York Rangers at Nassau Coliseum.

Trottier puts the Islanders ahead 1-0 with a first-period goal, scores three times and has three assists during the Islanders’ seven-goal second, and ends his night with a third-period power-play goal. Linemate Mike Bossy’s two-goal, five-point night is almost an afterthought.

It’s the last game before Christmas for the Islanders, who take a 16-game home unbeaten streak (12-0-4) into the break.

1980: The Winnipeg Jets defeat the visiting Colorado Rockies 5-4 to end their 30-game winless streak (0-23-7). Willy Lindstrom’s power-play goal with 1:50 remaining in the third period breaks a 4-4 tie. It’s the Jets’ first victory since defeating the Chicago Blackhawks 6-2 on Oct. 17. During the streak, they go through three coaches (Tommy McVie, Bill Sutherland and Mike Smith.

1988: Wayne Gretzky moves past Bobby Hull for fourth place on the NHL’s all-time goal-scoring list by scoring two empty-net goals for the Kings in a 5-2 victory against the Vancouver Canucks at Pacific Coliseum. The two goals give Gretzky 611 in his NHL career, one more than Hull. He also has two assists.

1999: Paul Coffey of the Carolina Hurricanes has an assist in a 4-3 loss to the Ottawa Senators to become the first defenseman (and eighth player) in NHL history to reach 1,500 points. The milestone comes when he sets up Sami Kapanen’s power-play goal late in the second period.

2006: Mike Sillinger becomes the first player in NHL history to reach double figures in goals with nine different teams when he scores his 10th of the season in the Islanders’ 4-0 win against the Columbus Blue Jackets at Nassau Coliseum.

2016: Arizona Coyotes forward Shane Doan reaches two milestones on the same night at Gila River Arena. Doan plays in his 1,500th NHL game, all with the Coyotes/Winnipeg Jets franchise, and scores his 400th goal when he beats Frederik Andersen of the Toronto Maple Leafs at 19:16 of the second period. However, the Coyotes lose 4-1. Leo Komarov scores two goals for Toronto. 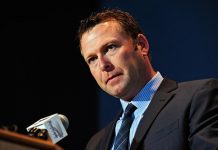 January 29: This Day in NHL History