1953: Montreal Canadiens forward Maurice Richard makes NHL history by becoming the first player to score 20 or more goals in each of his first 10 seasons. Richard reaches the milestone with the first of his two goals in Montreal’s 5-2 win against the New York Rangers at Madison Square Garden.

1985: Center Bryan Trottier becomes the 19th player in NHL history with 1,000 points when he scores two goals to help the New York Islanders rally from down 4-0 for a 4-4 tie with the Minnesota North Stars at Nassau Coliseum. Trottier is the first player to get his 1,000th point by scoring a shorthanded goal.

1998: Luc Robitaille reaches 1,000 NHL points when he has two assists for the Los Angeles Kings in a 5-3 victory against the visiting Calgary Flames. Robitaille is the sixth left wing in League history to reach 1,000 points.

On the same night, Pittsburgh Penguins forward Ron Francis becomes the 11th player in NHL history to reach 1,400 points. He has two assists in a 4-2 road victory against the Boston Bruins. Three years later, Francis, now with the Carolina Hurricanes, is credited with three assists in a 5-2 win against the visiting Tampa Bay Lightning to become the fifth player with 1,600 points.

2004: Detroit Red Wings forward Steve Yzerman moves past Mario Lemieux into sixth place on the NHL’s all-time scoring list. He gets 1,702nd point with a third-period assist in Detroit’s 5-2 victory against the Devils at Joe Louis Arena.

2015: Arizona Coyotes defenseman Oliver Ekman-Larsson scores a game-tying shorthanded goal against the Toronto Maple Leafs at Air Canada Centre five seconds after the puck drops to start the third period. It’s the quickest shorthanded goal from the start of a period in NHL history and sparks the Coyotes to a 3-1 victory.

2017: The Metropolitan Division wins the NHL All-Star Game at Staples Center in Los Angeles by defeating the Pacific Division 4-3 in the championship game of the 3-on-3 tournament. Forward Wayne Simmonds of the Philadelphia Flyers is named MVP after scoring the winning goal midway through the second half, five seconds after the tying goal by Cam Atkinson of the Columbus Blue Jackets. 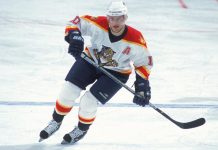 January 22: This Day in NHL History