1926: Alex Connell of the Ottawa Senators becomes the first goaltender in NHL history to have 10 shutouts in one season. He reaches the milestone with a 1-0 victory against the New York Americans at Madison Square Garden.

1937: Nels Stewart of the Americans becomes the NHL all-time goal-scoring leader. Stewart scores his 272nd NHL goal in a 4-0 victory against the Montreal Canadiens at the Forum, moving him past Howie Morenz. Stewart retires after the 1939-40 season with 324 goals, the most in NHL history until Maurice Richard scores his 325th on Nov. 8, 1952.

1969: The Chicago Blackhawks defeat the Philadelphia Flyers 12-0 at the Spectrum for the biggest shutout win in their history. Denis DeJordy gets his 13th NHL shutout. Dennis Hull has two goals and three assists, and Jim Pappin scores three goals for his second NHL hat trick.

1975: Johnny Bucyk scores a goal and has two assists to become the sixth player in NHL history with 1,200 points in his career. He helps the Bruins defeat the California Seals 6-0 at Boston Garden.

1990: Wayne Gretzky of the Los Angeles Kings sets an NHL record by reaching 100 points for the 11th consecutive season. The milestone comes when Gretzky gets an assist in a 5-2 win against the visiting New Jersey Devils. It’s his second 100-point season with the Kings after he reaches triple figures in each of his nine seasons with the Edmonton Oilers.

A few hours earlier, Mario Lemieux of the Pittsburgh Penguins extends his point streak to 40 games, the second-longest in NHL history, when he assists on all three of Tony Tanti’s goals in a 6-3 loss to the visiting Philadelphia Flyers. Lemieux passes Gretzky’s 39-game streak from the 1985-86 season, though he still trails Gretzky’s 51-game streak set in 1983-84.

1997: Ray Bourque scores Boston’s only goal in a 3-1 road loss to the Florida Panthers. It’s the 1,339th point of his NHL career, tying Bucyk for the most in Bruins history.

1999: The Montreal Canadiens limit the visiting Carolina Hurricanes to 10 shots on goal, setting a team record, but lose 3-1. Jeff Hackett allows three goals on eight shots in the second period; the Canadiens then hold the Hurricanes without a shot on goal in the third period, another franchise first. Montreal outshoots Carolina 18-0 in the third and 45-10 for the game, but Arturs Irbe makes 44 saves.

2015: Carolina’s Cam Ward sets an NHL record for the longest relief appearance by a goaltender without allowing a goal. Ward replaces starter Anton Khudobin 3:25 into the Hurricanes’ game against the St. Louis Blues after Khudobin allows two goals on three shots. Ward goes the rest of the way for Carolina, stopping all 29 shots he faces during the final 61:35 of regulation time and overtime. However, he’s beaten by defenseman Kevin Shattenkirk in the shootout, giving the Blues a 3-2 victory. The longest previous scoreless performance in relief was 60:05 by Bob Essensa of the Detroit Red Wings against the Washington Capitals on March 25, 1994. 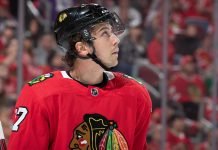