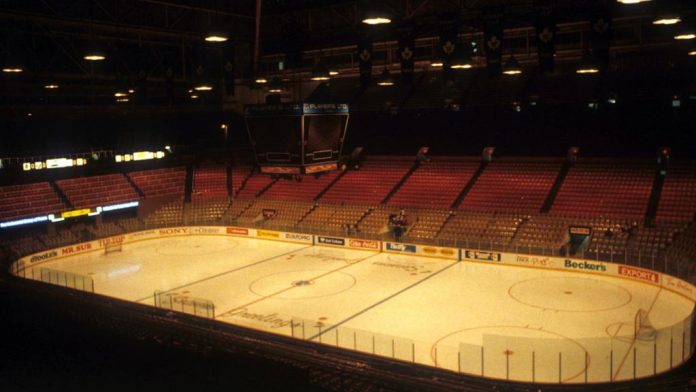 1944: Toronto’s Babe Pratt sets the NHL single-season scoring record for defensemen with an assist in a 6-3 victory against the New York Rangers at Madison Square Garden. It’s his 45th point, one more than the mark of 44 set by Flash Hollett in 1942-43.

1975: Bobby Orr has an assist for the Boston Bruins in a 3-1 road loss to the Buffalo Sabres to become the first player in League history to reach 100 points in six consecutive seasons. It’s the final 100-point season of his NHL career.

1983: The Los Angeles Kings end a 32-game winless streak against the Philadelphia Flyers with a 5-4 victory at the Spectrum. Marcel Dionne scores the winning goal to end the 0-27-5 streak and give the Kings their first win against the Flyers since Oct. 10, 1974.

1990: Bryan Trottier of the New York Islanders becomes the 15th player in NHL history to score 500 goals. The milestone comes during a 4-2 loss to the Calgary Flames at Nassau Coliseum. Trottier joins longtime linemate Mike Bossy as the only Islanders to reach 500 goals. Exactly eight years earlier, Trottier scores five times on five shots in an 8-2 win against the Flyers at the Coliseum.

1992: Steve Larmer sets an NHL record for most consecutive games played with one team when he appears in his 777th in a row with the Blackhawks, a 2-2 tie against the Kings. Larmer breaks the record set by Buffalo’s Craig Ramsay.

1999: The NHL says goodbye to the last arena still in use from the Original Six era when Maple Leaf Gardens in Toronto hosts its final game.

As was the case when the Gardens opened on Nov. 12, 1931, the Chicago Blackhawks are the opponent. Chicago won the opening-night game 2-1 and closes the building with a 6-2 victory. Bob Probert of the Blackhawks is the last player to score at the Gardens, beating Curtis Joseph midway through the third period. Derek King’s second-period goal is the last by a Toronto player.

Following the game, more than 100 Maple Leafs from the 1930s through the 1990s are introduced, and Anne Murray sings “The Maple Leaf Forever.”

2008: Martin Brodeur sets an NHL record by winning 30 games for the 12th consecutive season. Win No. 30 comes when Brian Gionta scores at 2:14 of overtime to give the New Jersey Devils a 3-2 victory against the Ottawa Senators at Prudential Center.

2015: Todd McLellan becomes the second-fastest coach in NHL history to reach 300 wins when the San Jose Sharks defeat the Arizona Coyotes 4-2 at Gila River Arena. Joe Pavelski’s hat trick helps McLellan reach the milestone in his 515th game, Only Bruce Boudreau (496 games) is faster to No. 300. 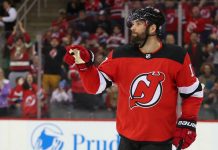 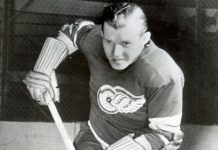