The Philadelphia Flyers plan to buyout Daniel Briere in the summer, he carries a $6.5 million salary cap hit. For the Flyers to buyout out Daniel Briere, it would cost them $3.3 million and spread out over four years. Briere said that he’s planning to remain with the Flyers, but understands the situation.

“Definitely,” he said. “It’s reality. There’s no doubt about it. But at the same time, those are things I can’t control at this moment. All I can control is for me to come back into the lineup and play as good as I can, to show them. Other than that, I can’t worry about injuries or what they are going to decide to do. That’s out of my control at this point.

Daniel Briere Buyout Danny Briere being bought out by Flyers 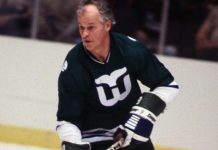 January 2: This Day in NHL History

Daniel Briere wants out of Montreal