With the Anaheim Ducks on a rebuild, they are looking to get younger and build on draft picks and prospects.

Pierre LeBrun reports the Anaheim Ducks have had a few calls on Josh Manson. They still like the 28-year-old defenseman but given where they are in the standings and youth movement they have to listen.

The Carolina Hurricanes and Winnipeg Jets are among the clubs with interest in Manson. Th Jets would like to trade for Matias Ekholm but it appears he is off the table with the Nashville Predators in playoff contention now.

LeBrun went on to state the Ducks’ asking price is a first-round pick and a top prospect for Manson. That is a steep price to pay and not sure the Ducks will get that asking price? 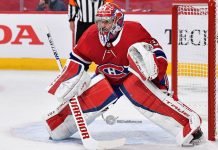