The biggest issue that is facing the Toronto Maple Leafs this off-season is salary cap space. If they want to shakeup the roster, they will have to trade a core player. GM Kyle Dubas has stated he will not trade Auston Matthews, Mitch Marner, John Tavares or William Nylander. That leaves Morgan Rielly as the likely candidate to be traded.

The Leafs have just $12.5 million in cap space for at least one defenceman (probably two), four forwards (probably five) and one goalie.

If the Leafs are looking to free up cap space, they should look at trading Morgan Rielly this off-season. It is believed GM Dubas would like to see Rasmus Sandin take over Rielly’s role.

Kevin McGran of the Toronto Star reports the return for Rielly would be solid. The Leafs traded forward Kasperi Kapanen to Pittsburgh for a first-round draft pick and a highly regarded prospect (Filip Hallander). Rielly would fetch at least that much, and the added cap room would help them round out their bottom six forwards with a couple of players at $2 million to $3 million rather than the league minimum.

NHL trade rumors have been going around that the Seattle Kraken will likely target Alex Kerfoot in the expansion draft that will free up some cap space, but the trade of Rielly gives the team even more flexibility to make more significant moves. 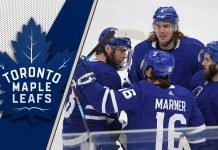 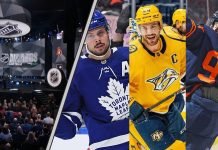 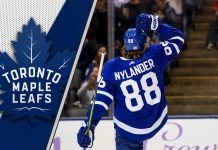 Will the Toronto Maple Leafs look at trading William Nylander this offseason?