The Fourth Period: With many teams looking for goal tending help, maybe it is time the Ottawa Senators look at trading goalie Craig Anderson.

Anderson, 37, is in the final-year of a two-year, $9.5 million contract and owns a modified no-trade clause where he can list up to 10 teams he will not accept a move to.

The Philadelphia Flyers, Carolina Hurricanes, Edmonton Oilers and New York Islanders are among the teams believed to be in the market for a goaltender and could pursue Anderson later on in the season.

Sportsnet:  The Washington Capitals are believed to be shopping winger Andre Burakovsky and there appears to be plenty of interest from around the NHL.

One of the teams interested in Burakovsky is the Vancouver Canucks, who are in the market for a top-six forward.

Buravkosky, 23, is in the final-year of a two-year, $6 million contract and can become a restricted free agent next summer.

Elliotte Friedman notes that the Capitals are not interested in moving Burakovsky for prospects and draft picks. 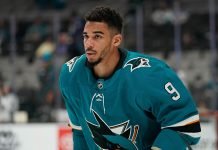