NBCSports: Joe Haggerty reports Vladimir Tarasenko is in the prime of his career at 27, has topped 30 goals each of the past four seasons while surpassing 70 points in three of the past four years with the Blues. His numbers are down this season, of course, and it feels like the marriage between the Blues and their Russian sniper might be coming to an end.

Jake DeBrusk might be one of the key pieces involved in getting Tarasenko to the Bruins. One would imagine it would take DeBrusk and perhaps Torey Krug along with the appropriate treasure trove of draft picks and prospects.

Haggerty feels if the Bruins are to compete for the Stanley Cup this year, they need to upgrade the forward position as they rank 27th in goal production.

Are the LA Kings looking at trading Jeff Carter?

Sportsnet: Elliotte Friedman reports the LA Kings are a struggling team right now and could be looking to start fresh. Off-loading Jeff Carter, 33, makes sense but, according to Friedman, any potential suitor for him will need to make sure he’s happy and comfortable with the situation.

“In 2011 you’ll remember [Carter] was traded to Columbus and it didn’t go well,” said Friedman. “He was unhappy, it didn’t work. I think teams who are interested in him with the Kings are being told, ‘If you want to acquire Jeff Carter you’re going to have to work with him to make sure he’s happy with the situation.’

“I don’t think his family wants to leave California, so anyone who is interested is going to have to work with him and make sure he’s happy with the fit to make sure it’s going to work.” 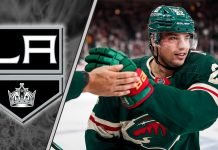