It was reported earlier this offseason that Tomas Hertl would rather be traded then re-sign with the San Jose Sharks. One team that had serious interest in a trade was the Ottawa Senators.

Sheng Peng of San Jose Hockey Now reports, GM Doug Wilson has had several conversations with Hertl’s agent. And when you have conversations with agents, they’re always kept in confidence. The rhythm of the negotiation, the time and place of it. Tomas knows how we feel about him.

Peng went on to say, Wilson would like to re-sign Hertl, but with the Salary Cap flat, it has to be one of those things that has to work for everybody. We’re dealing with some unique dynamics.

It is looking like GM Wilson would like to re-sign Hertl but not to the dollar amount Hertl wants. It is likely Hertl will be traded at the 2022 NHL trade deadline. 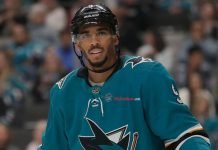