The Florida Panthers have been a big disappointment in the first half of this NHL season. The team was expected to contend for the Eastern Conference title but they are looking like they will struggle to make the playoffs.

With their poor play, it has lead to NHL trade rumors making the rounds that the team will be looking to recoup a first round draft pick and free up some Panthers salary cap space through a Sam Reinhart trade.

Elliotte Friedman was on Sportsnet’s Jeff Marek Show and brought up a Sam Reinhart trade. With the Panthers having a rough year, it might be a good time to unload some salary and Reinhart seems like the logical player to be traded.

Friedman went on to say in his piece that if Reinhart were traded to the Seattle Kraken, he would be put at the center position and not right wing as the Kraken already have Jordan Eberle and Oliver Bjorkstrand playing the right-side.

What are fans saying about a Sam Reinhart trade 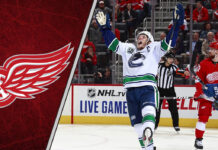