The Nashville Predators began their rebuilding process by agreeing to a long-term deal with forward Patric Hornqvist.

Hornqvist signed a five-year, $21.25 million contract to stay in Nashville, where he has spent his five-year NHL career and has emerged as one of the Predators’ top offensive weapons.

“I think we have something really good here going,” Hornqvist said at a news conference announcing the signing. “Obviously we know we had a bad season this year. I think everybody is going to come back and improve and have a run in the playoffs next year. ” 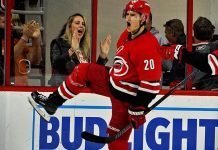