The Hockey News: Will new GM Don Sweeney ask Zdeno Chara to waive his no-trade clause? The Boston Bruins would like to shed Chara’s salary to free up cap space. Ken Campbell of the Hockey news wonders if Edmonton Oilers GM Peter Chiarelli would pursue Chara?

The Province: The Vancouver Canucks will look at adding a scoring defenceman in the off season. Cody Franson is the best available UFA defenceman. Franson will probably look for a $5 million/year contract. The Canucks will probably have to trade Kevin Bieksa or Dan Hamhuis to afford Franson. 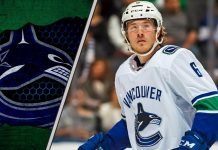