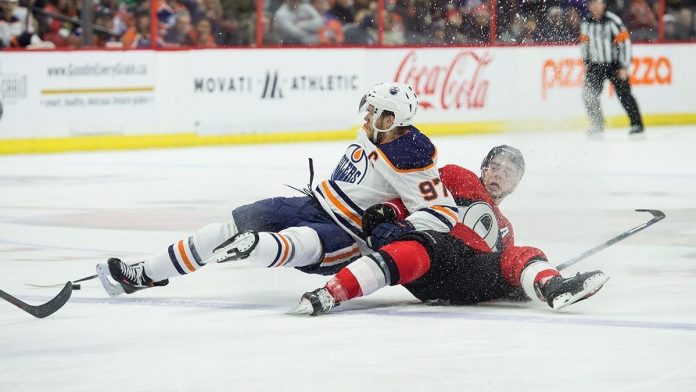 Are the Edmonton Oilers looking for a 3rd line Center?

Edmonton Journal: Kurt Leavins reports the Edmonton Oilers had a scout in attendance at the Ottawa Senators-Montreal Canadiens game on Saturday.

The scouts might be looking at someone who could properly fill the 3rd line center slot? The Sens center Chris Tierney is an expiring UFA at $2.9m. But so is Jean-Gabriel Pageau at $3.1 and is a right shot. Tierney is a lefty and wasn’t even in the lineup. But Pageau was and had 4 shots in a 4-0 loss. A dip in his production last season may lower the asking price.

Tierney and Pageau will likely be on the trade block as the 2020 NHL trade deadline approaches and the Sens look to move expiring contracts.

The Hockey News: The Tampa Bay Lightning and Brayden Point do not have a contract. Not only do they not have a contract, they’re not even close to having one. “We haven’t made any progress,” said Point’s agent Gerry Johannson, “but we’re working hard trying to get something figured out. We’re having dialogue.”

Negotiations have been cordial, but they haven’t been substantive enough, nor have they yielded any real progress. But one thing is certain. Point and Johannson did not look at Mitch Marner’s six-year, $65.4 million deal and see dollar signs flash before their eyes. To use Marner’s contract as a comparable would be futile for a couple of reasons. First, the Lightning don’t have that kind of cap space. But more importantly, it’s not how they and GM Julien BriseBois are willing to do business.

It’s generally accepted that even the best players in Tampa take bridge deals. Nikita Kucherov did it. So did Andrei Vasilevskiy. Victor Hedman didn’t exactly take a bridge deal because it was a five-year pact, but it was for a cap hit of only $4 million a year. BriseBois has made it clear that he’s not concerned with industry trends or what other players for other teams are receiving. He has a salary cap to manage and that’s what he’s going to do.