TSN Radio: Bob McKenzie was on the radio and stated that the Dallas Stars seek a 2nd round or 3rd round pick or young player in return for Julius Honka.

Honka, 23, is a restricted free agent defenseman and is skating in Finland awaiting a trade.

Trade rumors a few weeks ago had the Montreal Canadiens and Winnipeg Jets interested in Honka. The Canadiens reportedly wanted to do a player-for-player trade but the Stars want draft picks from the Habs.

Will the Vancouver Canucks look at bringing back Luke Schenn?

Schenn was no doubt hoping to avoid time in the minors this season after logging 29 games in the AHL last year. Unfortunately, the 2008 fifth-overall pick couldn’t secure a spot on the 23-man roster and appears destined for the minors again, barring a waiver claim.

Schenn’s $700,00 salary and 734 games of NHL experience could get him a look from some of the league’s other clubs. One of those clubs is the Vancouver Canucks. Rumors going around are the Canucks are interested in bringing back Schenn. 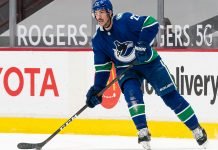