It has been “all quiet” on the Vladimir Tarasenko trade rumors front for the past week. The St. Louis Blues had hoped the Seattle Kraken would have selected him in the expansion draft but they passed and selected Vince Dunn.

Tarasenko does have a no-trade-clause but it is believed he has waived the clause for a trade to happen. The issue now is most teams have filled out their rosters and do not have the cap space to take on Tarasenko’s contract.

Jim Thomas of the St. Louis Post-Dispatch reports a Stanley Cup contender may take a chance on Tarasenko later in the season. Right now the only teams that could take on Tarasenko’s cap hit are the New York Islanders and Carolina Hurricanes.

It is looking like Tarasenko’s shoulder should not be an issue that prevents Tarasenko getting back to his 35 goal self. Vladimir, 29, has 2 years remaining at $7.5 million AAV. 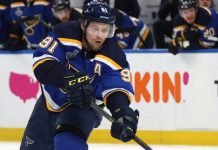 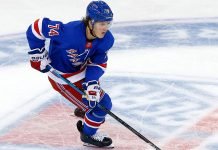