NHL Rumors earlier this season had Johnny Gaudreau not re-signing a contract extension with the Calgary Flames and he will end up being a Philadelphia Flyer.

The Fourth Period is reporting the Flames are expected to shake up their roster this summer and moving Gaudreau could be part of the retool. He has one-year left on his deal and expressed his desire to stay in Calgary, but if an extension can’t be ironed out, the team may look at moving him.

Besides the Flyers having an interest, it is believed the St. Louis Blues and New Jersey Devils will kick tires on Gaudreau’s availability.

Gaudreau, 27, has one year left on his contract after this season and comes with an AAV of $6.75 million and a modified-NTC. 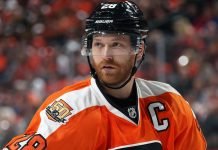