Jared Boll has agreed to a three-year contract extension with the Columbus Blue Jackets.

Boll, 27, was a fourth-round pick of the Blue Jackets in 2005 and has played all six of his seasons in Columbus. Last season he had two goals and four assists in 43 games. In 388 NHL contests he has 24 goals, 28 assists, and 963 penalty minutes.

“Jared Boll has invested a great deal of himself in this organization and community and we are very happy that he will continue to be an important part of our hockey club,” said Blue Jackets general manager Jarmo Kekalainen in a statement. “He brings toughness, determination and a great work ethic to our team and has become an important leader for us both on and off the ice.” 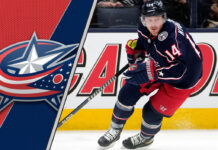