1928: Howie Morenz of the Canadiens scores three goals for his third NHL hat trick during a 9-1 road victory against the Toronto Maple Leafs. His first goal was his 100th in the NHL. The Canadiens become the first NHL team to allow two goals or fewer in 20 consecutive games.

1968: Bobby Hull scores twice to become the first Chicago Blackhawks player, and the fourth in the NHL, to score 400 goals. The milestone comes in a 4-2 win against the Boston Bruins at Chicago Stadium.

1976: The New York Rangers fire coach Ron Stewart and general manager Emile Francis, giving both jobs to longtime Canadiens forward John Ferguson. He is the 15th coach in Rangers history and the first who has no previous connection with them.

1980: The Philadelphia Flyers’ 35-game unbeaten streak, the longest in North American team sports history, ends when they lose 7-1 against the Minnesota North Stars at Met Center.

Philadelphia, 25-0-10 in its previous 35 games, takes a 1-0 lead on Bill Barber’s goal at 3:49 of the first period. However, Minnesota scores the next seven goals, handing the Flyers their first defeat since Oct. 13, when they had lost 9-2 against the Atlanta Flames in their second game of the season.

1981: Marcel Dionne of the Los Angeles Kings scores two goals to become the 13th NHL player with 1,000 points. Dionne reaches the milestone in a 5-3 win at the Hartford Whalers, his 740th NHL game. At the time, he’s the fastest to 1,000 points in NHL history.

1984: Wayne Gretzky scores three goals in the Edmonton Oilers’ 5-3 win against the Hartford Whalers to reach 50 goals for the fifth straight season. He does it in his 42nd game. It’s Gretzky’s seventh hat trick of the season and the 25th of his NHL career.

1987: Al Secord of the Blackhawks scores four goals in a span of 8:24 during the second period of a 6-4 win against the Maple Leafs at Chicago Stadium. It’s the fifth hat trick of his NHL career. Rookie Mark LaVarre has four assists, three of them on goals by Secord.

1999: Luc Robitaille of the Kings scores twice to become the 27th NHL player to reach 500 goals. He scores in the first and third periods against goaltender Dwayne Roloson, helping the Kings defeat the visiting Buffalo Sabres 4-2.

2004: Brian Boucher of the Phoenix Coyotes becomes the first NHL goaltender in nearly 55 years to have four consecutive shutouts. Boucher makes 27 saves in a 3-0 win against the Washington Capitals. The last goalie with four straight shutouts is Bill Durnan of the Canadiens from Feb. 26 to March 6, 1949. 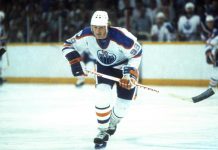 January 28: This Day in NHL History