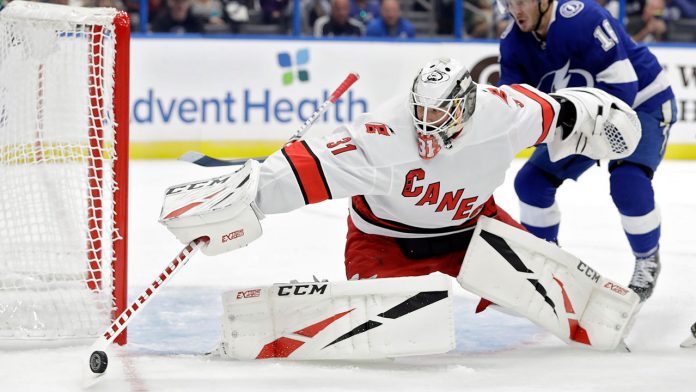 James O’Brien of NBC Sports reports the Hurricanes could make a goaltending move at the 2021 NHL trade deadline. Goaltending cost them the series against the Boston Bruins last season.

O’Brien felt the Carolina Hurricanes should have traded one of James Reimer or Petr Mrazek and targeted Corey Crawford in the off-season.

O’Brien states the Hurricanes could move things around at the NHL trade deadline. Maybe they could swap one of those two out (Reimer, Mrazek) for a goalie on an expiring contract, like Antti Raanta, Tuukka Rask, or Marc-Andre Fleury?

The San Jose Sharks are not expected to content for a playoff spot this season. They’ll likely be looking to make moves with an eye towards 2021-22.

Tomas Hertl is coming off knee surgery but will have trade value with two years left at $5.625. He will be likely moved if the team struggles during the season and a team is willing to overpay, likely a top prospect and a first-round pick.

Devan Dubnyk, Stefan Noesen and Matt Nieto could be traded as depth options for contending teams at the trade deadline.