The Toronto Maple Leafs are looking to add some forward depth. The Calgary Flames have a forward that wants to be traded. Could there be a match for the Leafs and Sam Bennett?

Sportsnet’s Luke Fox is reporting Leafs general manager Kyle Dubas, who has reportedly expressed some level of interest. Bennett fits the profile of an attractive target: Local guy. Top-five pick with something to prove.

The big question is, can the Leafs find a way to fit Bennett into the Leafs salary cap? Bennett’s cap hit is $2.55 million.

NHL trade rumors have Flames GM Brad Treliving wanting a roster player in return as they are in a win now mode and not a rebuild mode. Draft picks and propstects is not what Treliving is seeking.

The Leafs would either have to give up Justin Holl or Alex Kerfoot to get Bennett and not sure Dubas will do that. 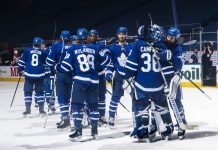 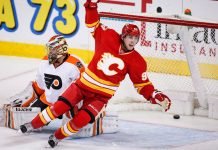 The Calgary Flames will be sellers at the NHL trade deadline