Teemu Selanne, 43, is returning to the Anaheim Ducks for his 21st and final NHL season.

After spending most of the summer contemplating his future, he released a humorous video on YouTube confirming he’ll be back for one more run at another Stanley Cup title. He also hopes to play for Finland in his record sixth Olympics in Sochi in February.

Selanne agreed to a one-year deal worth $2 million — and for the first time in his now-annual flirtations with retirement, the Finnish Flash insists he won’t be back. 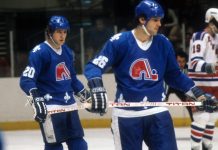