Defenceman Samuel Morin has signed a three-year, entry-level contract with the Philadelphia Flyers.

The 6-foot-6, 202 pound Morin played the last two seasons in the Quebec Major Junior Hockey League with Rimouski Oceanic. He scored four goals and had 12 assists in 46 games. Morin also compiled 117 penalty minutes while having a plus-10 rating. 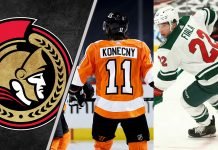