1936: Two future Hockey Hall of Famers make their NHL debuts for the Toronto Maple Leafs. Center Syl Apps and goaltender Turk Broda play in their first game, a 3-1 loss to the Detroit Red Wings at Maple Leaf Gardens. They are teammates on three Stanley Cup championship teams with Toronto.

1942: Carl Liscombe of the Detroit Red Wings sets an NHL record with seven points in a 12-5 victory against the visiting New York Rangers. Liscombe has his second hat trick and four assists. Six of Detroit’s goals come on the power play, setting a team record.

1955: Jean Beliveau scores all four goals for the Montreal Canadiens in a 4-2 win against the Boston Bruins. Three of the four are power-play goals and all are scored on the same penalty in a span of 44 seconds. Under the rules at the time, a penalized player must serve his entire minor penalty.

The NHL changes the rule for the 1956-57 season, allowing a penalized player to return to the ice if a goal is scored.

Montreal’s Bert Olmstead assists on each of Beliveau’s power-play goals for the second-fastest three assists in NHL history.

1970: Goaltenders Glenn Hall and Ernie Wakely combine to help the St. Louis Blues defeat the Bruins 2-0. It’s the first win for the Blues at Boston Garden since entering the NHL in 1967 and ends the Bruins’ home unbeaten streak at 29 games (24-0-5).

1979: Michel Larocque makes 32 saves for his 14th NHL shutout and Guy Lafleur scores twice in the third period to help the Canadiens defeat the Washington Capitals 2-0 at the Forum. The win gives the Canadiens an all-time record of 34-0-2 against the Capitals, who enter the League in 1974.

1983: The Chicago Blackhawks set a record for the fastest two goals from the start of a period in NHL history by one team. Ken Yaremchuk scores 12 seconds into the second period and Darryl Sutter scores at 21 seconds during a 10-5 loss to the Minnesota North Stars at Met Center.

On the same night, the Rangers and Quebec Nordiques set a record for the fastest two goals from the start of a period by two teams. Quebec’s Andre Savard scores eight seconds into the third period, but New York’s Pierre Larouche matches him by scoring six seconds later. The game at Le Colisee in Quebec ends in a 4-4 tie.

2002: Rangers goaltender Mike Richter plays his final NHL game, making 39 saves in a 5-2 victory against the Edmonton Oilers at Madison Square Garden, a game when he is accidentally kneed in the head by former teammate Todd Marchant. Richter ends his career as the Rangers’ all-time leader in wins (301) and games played (666), totals later surpassed by Henrik Lundqvist. He is still the only goalie since 1940 to help them to the Stanley Cup. His No. 35 is later retired. 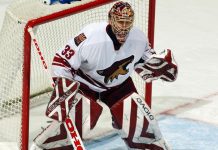 January 9: This Day in NHL History