1918: Less than three weeks after beginning play, the NHL announces a rule change that permits goaltenders to leave their feet while making a save. Before that, it’s a penalty for goaltenders to sit or lie on the ice to stop the puck. Before the change, teams combine to score 12.2 goals per game; after the rule change, that number drops to 8.9.

1930: The Boston Bruins win their NHL-record 14th consecutive game, a 4-3 road victory against the Pittsburgh Pirates. Boston’s streak remains a record until the 1981-82 New York Islanders win 15 in a row.

1954: Canadiens forward Bert Olmstead scores four goals and has four assists in a 12-1 win against the Chicago Blackhawks at the Forum to tie the NHL single-game record for points. Olmstead’s eight-point night equals the mark set by teammate Maurice Richard on Dec. 28, 1944. Olmstead has a goal and an assist in the first period, two goals and an assist in the second, and a goal and two assists in the third; the record-tying point is an assist on Ken Mosdell’s third goal of the game at 17:39 of the third period.

1981: Phil Esposito plays in his final NHL game, a 3-3 tie for the New York Rangers against the Buffalo Sabres at Madison Square Garden. Esposito, 38, gets an assist on a first-period goal by Dean Talafous and retires with 717 goals and 1,590 points, second to Gordie Howe in each category.

1992: Dominik Hasek, a 27-year-old rookie goalie, gets his first NHL shutout by making 21 saves for the Blackhawks in a 2-0 victory against the Toronto Maple Leafs at Chicago Stadium. Hasek finishes his NHL career with 81 shutouts among his 389 victories.

1998: Dale Hunter has three assists for the Washington Capitals in a 4-1 victory against the visiting Philadelphia Flyers. Hunter becomes the first player to have 1,000 points and 3,000 penalty minutes in an NHL career.

2004: Phoenix Coyotes goaltender Brian Boucher is unbeatable for the fifth game in a row.

Boucher makes 21 saves for his fifth consecutive shutout, a 2-0 victory against the Minnesota Wild at Xcel Energy Center. He also breaks the record set by Bill Durnan of the Montreal Canadiens in 1949 for the longest shutout streak in modern NHL history.

Boucher’s shutout streak ends at 332:01 two days later when Randy Robitaille scores for the Atlanta Thrashers 6:16 into the first period of a 1-1 tie.

2016: Alex Ovechkin scores his second goal of the game and the 499th of his NHL career at 1:25 of overtime to give the Washington Capitals a 4-3 win against the Rangers at Madison Square Garden. It’s Ovechkin’s 20th goal against Henrik Lundqvist, the most he’s scored against any goaltender. 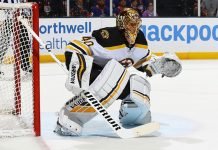 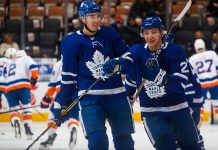 Bruins and Kings seeking a defenceman