1951: Three weeks before his 46th birthday, assistant trainer Moe Roberts of the visiting Chicago Blackhawks replaces injured goaltender Harry Lumley after two periods and does not allow a goal in a 5-2 home loss to the Detroit Red Wings. It’s the first NHL game for Roberts since playing for the 1933-34 New York Americans. Roberts is still the oldest man in NHL history to play goal.

1954: Terry Sawchuk gets his third straight shutout, the 51st of his career, in Detroit’s 2-0 victory against the visiting Toronto Maple Leafs. It follows 5-0 and 1-0 victories against Chicago in back-to-back games

1981: Getting eight hat tricks in an NHL career is pretty remarkable. To get that many before your 21st birthday, you’d have to be Wayne Gretzky.

The Great One gets the eighth hat trick of his NHL career two months before turning 21 when he scores four times in the Edmonton Oilers’ 11-4 victory against the Los Angeles Kings at Northlands Coliseum. Gretzky scores twice in the first period, completes the hat trick with a power-play goal early in the second and tacks on No. 4 at 1:30 of the third. For good measure, he also has an assist.

Gretzky goes on to set the NHL single-season record with 10 hat tricks, a mark he matches in 1983-84.

1983: The largest crowd in NHL history (to that point) jams Joe Louis Arena to watch the Red Wings defeat the Pittsburgh Penguins 5-2. The 21,019 fans see Detroit rookie Kelly Kisio lead the scoring with a goal and two assists.

1992: The Red Wings reach double figures in consecutive games for the first time in their history by defeating the St. Louis Blues 11-6 at Joe Louis Arena. Dino Ciccarelli leads the scoring with two goals and two assists. The game comes two nights after the Red Wings defeat the visiting Tampa Bay Lightning 10-5.

1997: Three years after helping the New York Rangers to their first Stanley Cup since 1940, Mark Messier returns to Madison Square Garden for the first time after signing with the Vancouver Canucks during the offseason. Messier cries on the bench during a video tribute and scores a breakaway goal and is named the game’s First Star in Vancouver’s 4-2 victory.

2015: The Montreal Canadiens overwhelm the Rangers 5-1 at Madison Square Garden, but lose goaltender Carey Price for the remainder of the season. Price, the Vezina Trophy winner in 2014-15, does not come out for the third period because of the recurrence of a lower-body injury and does not play again during the 2015-16 season. 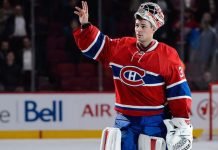 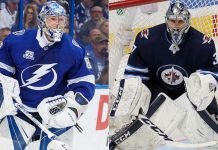 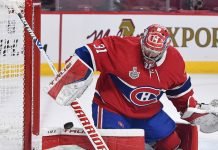