1926: Detroit’s new NHL franchise, known as the Cougars, plays its first game but loses 2-0 to the Boston Bruins.
Duke Keats scores an early goal and sets up one by Archie Briden to give Boston a two-goal lead before the game is five minutes old. Those are the only shots to get past Detroit goaltender Herb Stuart, but Bruins goalie Doc Stewart makes 21 saves for the shutout.

The game is played before 6,000 fans at the Border Cities Arena in Windsor, Ontario. All of Detroit’s home games are played in Windsor during its first season.

On the same night, the Montreal Canadiens make the Forum their permanent home, though they lose 2-1 to the Ottawa Senators. The Forum remains their home for 70 years.

1930: Lorne Chabot becomes the first goaltender in NHL history to start a season with three consecutive shutouts when the Toronto Maple Leafs defeat the Montreal Maroons 3-0. The three straight shutouts match Chabot’s total in the other 34 games he plays that season.

1977: Hours after signing with the Detroit Red Wings, center Vaclav Nedomansky has three assists in his first NHL game, a 5-3 loss to the Atlanta Flames at the Omni. Nedomansky defects from Czechoslovakia in 1974, and plays with the Toronto Toros and Birmingham Bulls of the World Hockey Association before joining the Red Wings as a free agent.

1979: The Vancouver Canucks defeat the Canadiens 5-2 at Pacific Coliseum for their first home victory against Montreal since entering the League in 1970. Glen Hanlon makes 34 saves. The victory ends Vancouver’s streak of 21 home games (0-15-6) without a win against the Canadiens.

1991: Mark Recchi, a 2017 inductee into the Hockey Hall of Fame, has a six-point game, including his first NHL hat trick, to help the Pittsburgh Penguins defeat the Quebec Nordiques 7-3 at Le Colisee. Kevin Stevens also scores three goals for the Penguins.

2010: Steven Stamkos scores three goals and sets up another, helping the Tampa Bay Lightning defeat the Philadelphia Flyers 8-7 at Wells Fargo Center. The teams combine for nine goals in the first period and five more in the second before Nate Thompson scores the game-winner 5:19 into the third. The 15 goals are the most in an NHL game since the Calgary Flames defeated the Lightning 9-6 on Dec. 13, 2007. 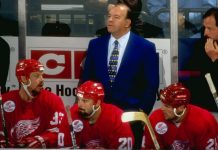 November 24: This Day in NHL History 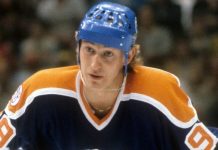 October 14: This Day in NHL History 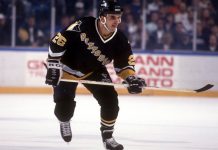 October 5: This Day in NHL History