CSNWashington: Mike Green’s name is still coming up in trade rumors. The Red Wings are interested and Washington needs a 2nd line center and wants Gustav Nyquist. Other tradeo ptions for the Caps are David Krejci,  Mike Fisher, and  Antoine Vermette.

Calgary Herald: Joel Colborne confident a deal will get done with the Calgary Flames before his Aug. 1 arbitration hearing.

The Hockey News: The Toronto Maple Leafs are the only NHL team to crack Forbes’ list of 50 most valuable sports franchises. Forbes has the Leafs ranked #26 with their $1.15 billion valuation.

The Fourth Period: The Boston Bruins are still looking to free up cap space and appear to be shopping defenseman Johnny Boychuk. It’s believed the Calgary Flames, Minnesota Wild and Colorado Avalanche are among the teams interested in Boychuk. 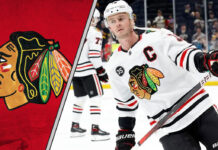