The Philadelphia Flyers have re-signed forward Michael Raffl to a two-year contract extension through the 2020-21 season with a $1.6 million AAV.

“We’re happy to have Michael for the next two years,” Flyers GM Chuck Fletcher said. “Throughout his six seasons with the Flyers he has played a pivotal role in a variety of positions and situations. His versatility, experience and work ethic will be valuable assets to our team going forward.”

The Austrian native played professionally in Sweden before coming over to the NHL and represented his home country at the 2014 Winter Olympics.

He was scheduled to be an unrestricted free agent after this season, coming off of a three-year deal with a $2.35 million cap hit.

“I’m very happy,” Raffl said. “We’ve been working on this for a little bit now. I really like it here. This is the place I want to be and this has been my home, so I’m excited about the next two years. We have a young, exciting team and I’m happy to continue to be a part of it going forward.” 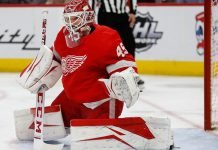 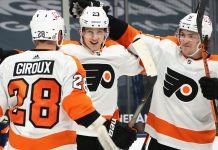 Philadelphia Flyers will be buyers at NHL trade deadline