1988 – Goalie Sean Burke made his NHL debut as New Jersey won 7-6 in OT at Boston. Burke, fresh off Canada’s Olympic team, helped the Devils reach the playoffs for the first time in franchise history with a 10-1 record down the stretch.

2003 – Toronto Maple Leafs acquired right wing Owen Nolan from the San Jose Sharks in exchange for Alyn McCauley and Brad Boyes, along with Toronto’s first round pick in the 2003 NHL Draft (Steve Bernier).

2004 – Philadelphia Flyers beat the visiting Ottawa Senators 5-3. The teams set NHL record with 419 total penalty minutes, most of which came as a result of 5 separate brawls in the final two minutes of the game. 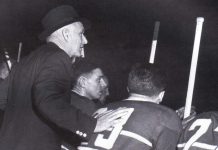 October 22: This Day in NHL History 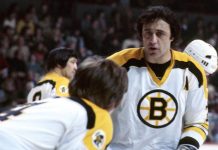 May 15: This Day in NHL History