This offseason the main teams Jack Eichel has been rumored to be traded to were the Minnesota Wild, New York Rangers, Vegas Golden Knights and the Columbus Blue Jackets.

Darren Dreger was on TSN’s insider trading and stated that there are no new NHL trade rumors going around. Most of the discussions were focused on what type of treatment will Eichel receive on his neck?

Dreger went on to say Eichel will be placed on LTIR as both sides decide on what type of surgery Eichel will get. There is no word on how long Eichel could be out if he has surgery soon.

With no decisions being made on fixing Eichel’s neck, no team is likely to make a trade until they know Eichel is 100% healthy. Right now, Eichel could be a 2022 NHL trade deadline deal and only if he goes ahead and has his surgery. 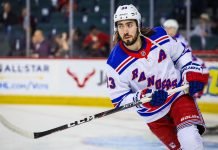