The Ottawa Sun reports that Jared Cowen has received an eight-year, $28 million contract offer from the Ottawa Senators as both sides look to get a deal done before the start of training camp next month.

The deal has not been rejected, nothing has been done and both side have exchanged ‘several proposals.’

Cowen’s agent Rick Valette, told The Ottawa Citizen that the two sides have had some ‘preliminary discussions’ about financial numbers, but are more focused on the length of the contract. 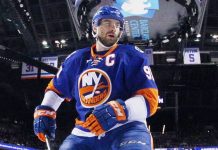