1928: Duke Keats of the Chicago Blackhawks scores at 15:50 of the second period in a game against the Ottawa Senators, ending goalie Alec Connell’s streak of six consecutive shutouts. In all, Connell goes 460:49 without allowing a goal. The Senators win 3-2 at Chicago.

1964: In one of the biggest trades in NHL history, the Toronto Maple Leafs send defensemen Arnie Brown and Rod Seiling with forwards Bill Collins, Dick Duff, and Bob Nevin to the New York Rangers for forwards Andy Bathgate and Don McKenney. The trade works out well for each team: Bathgate and McKenney help Toronto win the Stanley Cup in 1964, and Brown, Seiling and Nevin are keys to the revival of the Rangers.

1980: The United States defeats the Soviet Union 4-3 in their medal-round game at the 1980 Lake Placid Olympics. Mike Eruzione scores the tie-breaking goal midway through the third period and goaltender Jim Craig finishes with 36 saves. Two days later, the U.S. defeats Finland to win its first Olympic hockey gold medal since 1960.

1981: Brothers Peter Stastny and Anton Stastny combine for 16 points in the Quebec Nordiques’ 11-7 victory against the Washington Capitals in Landover, Maryland.

Peter has four goals and four assists, three on goals by Anton. In turn, Anton has three of his five assists on goals by Peter.

The brothers, playing in their first NHL season after defecting from Czechoslovakia, set an NHL record for the most points by a player in one road game. They join Maurice Richard, Bert Olmstead, Tom Bladon and Bryan Trottier as the only players to score eight points in a game (Darryl Sittler holds the NHL single-game record with 10).

The record-setting performance comes two days after each of the Stastnys scores three goals in a 9-3 win against the Vancouver Canucks.

1981: United States-born coaches oppose each other for the first time in NHL history. The Hartford Whalers, coached by Massachusetts native Larry Pleau, face the Rangers and Craig Patrick (from Michigan). The Whalers defeat the Rangers 6-5 at the Hartford Civic Center.

1984: Wayne Gretzky scores four goals for his 10th hat trick of the season, tying the NHL record he set in 1981-82. It’s his second four-goal game in as many days and helps the Edmonton Oilers to a 9-2 win against the Pittsburgh Penguins at the Civic Arena.

1997: Teemu Selanne of the Mighty Ducks of Anaheim becomes the first player in NHL history to score a goal against 24 teams in one season. Selanne completes his collection when he scores in a 4-2 win against the Phoenix Coyotes at Arrowhead Pond.

1998: The Czech Republic, led by goaltender Dominik Hasek, wins the gold medal at the Nagano Olympics by defeating Russia 1-0. 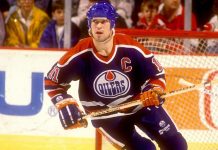 January 13: This Day in NHL History 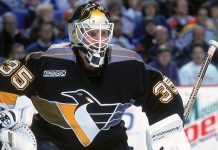 January 5: This Day in NHL History 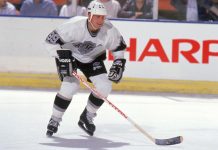 October 6: This Day in NHL History