1947: With his team struggling offensively, New York Rangers goalie Chuck Rayner skates the puck all the way into the Montreal Canadiens zone three times to try to score a goal. The strategy doesn’t work, and the Rangers lose 2-1 at the Forum.

1964: Montreal Canadiens forward Bobby Rousseau scores five goals in a 9-3 victory against the Detroit Red Wings at the Forum. It’s the first time in Rousseau’s NHL career that he scores more than two goals in a game, and it’s the only five-goal game in the League between February 1955 and November 1968.

1970: Terry Sawchuk makes 29 saves for his 447th (and final) NHL victory and 103rd shutout, helping the Rangers defeat the Pittsburgh Penguins 6-0 at Madison Square Garden. Sawchuk holds both NHL records when he plays his final game in April 1970.

1980: Wayne Gretzky scores three goals for his first NHL hat trick and has an assist to help the Edmonton Oilers defeat the Winnipeg Jets 9-2 at Northlands Coliseum. He scores once in each period, giving him 31 goals for the season. It comes in Gretzky’s 50th NHL game and is the first of his NHL-record 50 hat tricks.

1992: Denis Potvin becomes the first member of the New York Islanders to have his number retired. His No. 5 is raised to the rafters of Nassau Coliseum four years after he retires as the highest-scoring defenseman in NHL history.

1993: Gary Bettman officially takes office as the first Commissioner of the NHL.

1997: Ray Bourque passes Johnny Bucyk to become the top scorer in the history of the Boston Bruins when he scores a first-period goal in a 3-0 road victory against the Tampa Bay Lightning.

The goal is the 1,340th point of his NHL career and comes two days after he ties Bucyk’s record with a shorthanded goal against the Florida Panthers.

Bourque also has a third-period assist and extends his Bruins record to 1,506 points before he’s traded to the Colorado Avalanche on March 6, 2000.

2001: Patrick Roy becomes the first goaltender in NHL history to play in 40 or more games for 16 straight seasons, extending his own League record. He reaches the milestone by playing in the Colorado Avalanche’s 5-3 road loss to the Vancouver Canucks.

NHL News: Will Quebec City ever get the Nordiques back? 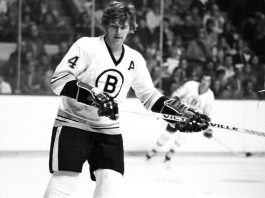 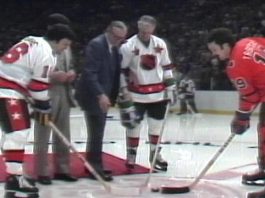 February 5: This Day in NHL History