TSN: Craig Button believes the free-agent market will determine where Toronto Maple Leafs winger James van Riemsdyk signs this summer. He feels van Riemsdyk may have to give up some money to stay with the Leafs. If he goes to market, here are Button’s possible destinations.

Are the New York Rangers shopping a first round pick?

The Athletic: Craig Custance reports New York Rangers general manager Jeff Gorton is open to peddling one of his three first-round picks leading up to the opening day of the 2018 NHL Draft. Gorton tells Custance he open to moving a first-rounder if he can get a good young player in return.

Mercury News:  Since joining the San Jose Sharks in a NHL trade-deadline deal with the Buffalo Sabres, Evander Kane, 26, has been a terrific addition to their offensive attack. In nine games with San Jose he has 10 points, including a recent four-goal effort against Calgary. The Sharks have $59.5-million invested in 19 players, the Sharks have sufficient cap space to re-sign Kane if they choose. He’d be a solid consolation prize if the club loses out in a potential bidding war for center John Tavares. 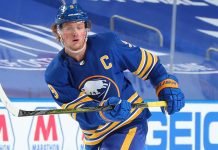 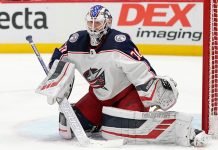