For all the latest NHL Trade Rumors click here.

Ottawa Sun: Bruce Garrioch reports the Vegas Golden Knights aren’t the only club talking to the Ottawa Senators about Erik Karlsson, as the Carolina Hurricanes are believed to have spoken to them. He notes the Washington Capitals and Tampa Bay Lightning were interested back in February. Bobby Ryan, Zack Smith and Jean-Gabriel Pageau are also being mentioned, though Garrioch notes the Sens didn’t show any interest in moving Pageau in February and he now has a chance to play an expanded role.

TSN: Bob McKenzie reports the New York Islanders are among the clubs with interest in Washington Capitals goaltender Philipp Grubauer. The Carolina Hurricanes, Detroit Red Wings and Chicago Blackhawks are also believed in the mix. The Capitals are thought to be seeking at least a first-round pick for Grubauer.

TSN: Pierre LeBrun reports the Los Angeles Kings are among the teams talking to the Carolina Hurricanes about left wing Jeff Skinner. The Kings are also talking to free-agent left wing Ilya Kovalchuk and if they sign him it could take them out of the bidding for Skinner. The Pittsburgh Penguins and St. Louis Blues have also shown interest in the Hurricanes’ forward.

LeBrun also reports the Hurricanes are willing to pay restricted free agent center Elias Lindholm just north of $4 million annually but the Lindholm camp seeks over $5 million. The center’s representatives are slated to meet with Hurricanes GM Don Waddell today. LeBrun believes they could shop Lindholm if a deal cannot be hashed out, saying the Calgary Flames are among the clubs who’ve expressed interest. 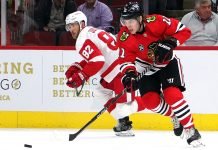