Anaheim Ducks are in trade talks with eastern conference team

TSN: Blake Price reports the following via Twitter: “Pierre Mcguire tells us the Anaheim Ducks are in trade talks with an Eastern Conference team to unload a significant contract, and get room for RFAs.” Rumors are it is Cam Fowler’s contract ($4 million annually through 2017-18) is the one the Ducks intend to move. The New Jersey Devils, Buffalo Sabres, Boston Bruins, Ottawa Senators and Toronto Maple Leafs are the likely trade destinations.

TSN: Bob McKenzie reports restricted free agent winger Tobias Rieder hasn’t demanded a trade from the Arizona Coyotes, but his agent has suggested it would be in everyone’s best interests to move him if the Coyotes are unwilling to meet his contract demands. 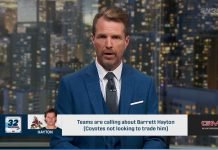